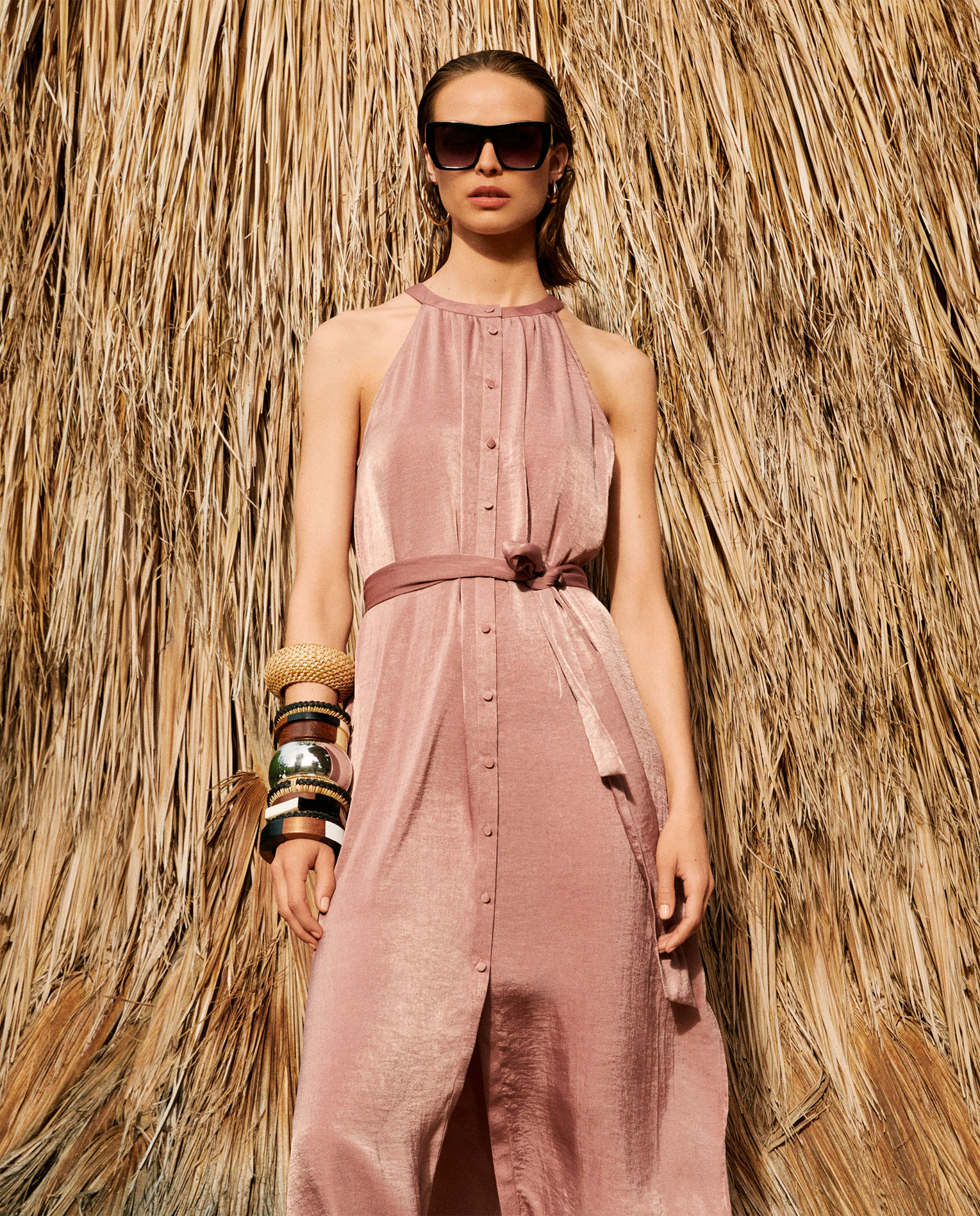 Paola Zurita has stood out from other influencers by being in a constant search of balance between her emotional, physical, and spiritual states. Among her content, it’s common to find tools that encourage that path, and so she shares them with her audience so that they too can achieve a better version of themselves. She’s had to face several different challenges on her path, ones that have made her stronger, and one of those has definitely been having psoriasis. With the purpose of sharing this process, Paola speaks to L’Beauté alongside Clarins for the first time about her story with this autoimmune disease. Clarins is one of the pioneering brands in creating natural formulas ––that don’t harm the dermis and that are fit for sensitive skins–– without compromising quality or effectiveness. They also draw inspiration from women themselves, so getting Paola, L’Beauté, and Clarins together created a perfect synergy.

According to Dr. Rafael Cherem, allergies can appear on a chemical, physical or emotional level as stomach, respiratory, neurological problems or through our skin, just as it did on Paola. Rafael helped her control this ailment by treating every allergy detected. The procedure? Running kinesiology tests, which are a form of therapy that use muscle monitoring. The treatment is a non-invasive technique based on diet upon hours that follows medicine-free principles based on acupuncture.

L’Beauté: Tell us about your path to self-discovery on a professional level…

Paola Zurita: I’ve always been very bookish, I love to analyze, learn, and read. I studied marketing at Universidad Iberoamericana in Mexico City and actually worked a couple of corporate jobs during my school years. I wanted to find something that I felt passionate about and that I could combine with my career, but I didn’t even know where to begin. At this point in my life I felt like I was only half happy. When I finished, I left for Vancouver to study Digital Communication and Strategy. While doing so, I worked for a smaller company that was more my style. It was then and there that I realized I liked making my own decisions, that I liked taking initiative and, above all, that I wanted to create. This was what brought me to where I am today. When I came back to Mexico, the time to make a decision about what professional path I wanted to pursue had caught up to me; on one hand I had my dad telling me to start a corporate job, and on the other I could see my siblings JuanPa and Andy creating content on social media. They were the “weird ones” when they started doing that. Even I used to say it (laughs), now that I look back on it, I can tell you that we used to worry a lot about what would happen in the future. I’ll confess to being scared to begin because negative thoughts used to roam around in my mind, like, “I don’t have a salary. I’ve never done this. What if people don’t like it”.

LB: What was the key moment in your life when you realized that you needed to work for that better version of yourself?

PZ: I feel like I wasn’t doing well emotionally when I came back from Canada. And that was reflecting on my body. Having had gained 10 to 12 kilos and not being able to lose them was key to understanding the importance of mental and emotional health. I realized that when you’re not OK on the inside, everything else falls apart.

LB: Do you think the body can speak?

PZ: 100%. Your body will tell you what you don’t want to hear. When you find yourself with people who have that special glow it’s because they’re probably going through a good time. And on the other hand, when you’re stressed, anxious, frustrated and not sleeping well, you can also see it. The body is so wise that it communicates things that you can’t see.

LB: Speaking of skin, did you have any break outs?

PZ: Yes. In 2018 I was diagnosed with an autoimmune disease called psoriasis. In these kinds of ailments, your body literally starts attacking you. I remember I first got headaches, I felt drained, was super stressed out but kept on with my life normally. Until psoriasis appeared, it was like my body was screaming for help and saying: “I already sent all the other warning signs, I’ll now show you somewhere you won’t be able to hide it”, this was in the form of hives all over my skin.

LB: From your experience, how is it to live with this disease?

PZ: Three weeks before being diagnosed I had met someone who had it too and who described it as the worst thing that could happen to you because you go on many medicines and creams that dry your skin out. When it happened to me, I didn’t want to take the pills, medicines, and creams because what they do is remove symptoms. I wanted to get to the bottom of it and why it had appeared from one day to another so I could try to work it out. Then I did some internal work on myself and discovered I wasn’t sleeping well, I wasn’t getting any rest, I was stressed out and even felt sad. I wasn’t comfortable with my body ––even though I don’t think psoriasis has anything to do with this–– and all of this creates further tension. Then imagine getting hives all over your body and just wanting to hide. I had it on my face, arms, chest, on my back, there was no way out. It was a hard hit from reality, and Doctor Rafael Cherem was key in realizing the reason behind it was an emotional one.

LB: What do you think is key when it comes to harmonizing the body?

PZ: The base of it all is personal conscience, something I didn’t have back then. I feel like I used to live in auto-mode, like a robot, and not noticing many things. I think most of us have gone through something like that at least once. We act a certain way without realizing why, just because everyone else does it. To me, being conscious is looking out for your thoughts, your feelings, listening to your body, being present and opening up to that world. It’s making the decision to start living life from conscience itself. I always describe it as being able to get outside your body to see a movie of what’s happening in the present. That also helps in not being someone who’s reactive but rather someone who can decide on how to act. The moment when I was diagnosed with psoriasis was definitely one of the most vulnerable moments of my life.

LB: What do you think about vulnerability?

PZ: Vulnerability is our best attribute, it opens the door to connect with our artistic side, with feelings. It’s hard because we’ve been taught that being vulnerable is a sign of weakness, but it isn’t, I think it’s what gives you strength in life. Feeling those renewing emotions such as gratitude, tolerance, empathy; and even the ones that drain you, are what make you human. In my case, I’ve discovered that when I decide not to feel, I do things, we have to stop doing and simply connect with ourselves. If you feel vulnerable, face it, connect your feelings with your heart and with yourself. Pause and question yourself before your body needs to tell you, like it happened to me.

LB: Clarins has always been one of our favorite brands, their principle is “Live Beautifully”. How do you identify with this philosophy?

PZ: My own philosophy goes hand in hand with this idea and, aside from identifying with finding beauty in daily life, Clarins’ general philosophy, how they make their products, the ingredients they use, I love it all. Their products connect with everything I believe in. I love things natural and the way I managed to control my psoriasis was completely natural.

LB: For Clarins, beauty and wellbeing are priorities. How do you communicate this with your followers?

PZ: External beauty is a reflection of internal beauty. I don’t like beauty standards because one simply is, it’s why everyone is so unique. There are two sides to my content that I like a lot, one is my podcast “Empieza en ti” (Begin on yourself), there is where I try to communicate the mental and emotional sides. On the other hand, you find exercise. This goes beyond having a “great body” and focuses more on how good it makes you feel on every level. It makes you think clearer, make better decisions, you create endorphins, you become stronger. It’s my way of being and my lifestyle, I like being honest, authentic, and telling it like it is. I think my whole family is like that: honest and transparent.

LB: Since 1954, plants have been the base of efficacy for Clarins when it comes to skincare. How do you think nature’s cures have helped you?

PZ: I’ve always been someone drawn to nature. I love the outdoors, being up in a mountain or deep diving in the water. After having gone through this and while I’m still on a path to self-discovery ––which never ends–– I learned that nature, aside from relaxing you, can be a catalyst to look at yourself. I think your body is grateful for it in every way.

What are your favorite Clarins products?

“I use this anti-age treatment day and night because it stimulates hydration, regeneration and skin protection”.

“I like that it hydrates your dermis without leaving it oily”.

“You put it on before bed and when you wake up you can feel how all the nutrients were absorbed”.

“We used this during the photoshoot. It relaxes, calms and nourishes, all at once”.

“It alleviates tired legs, refreshes and gives you an overall feeling of lightness”.

Sign up with your email address to receive news and updates!

Helena Christensen. The Icon. The Legend. The Tribute.

What do you think? Cancelar respuesta